Little did they know the day would end with a dog pile in shallow center field shortly before 10:30 p.m., the same outfield that had many gallons of water pumped out of it from the overnight heavy downpour and sand poured in spots just to get it in playing condition.

The celebration happened after Austin Brewer’s hit down the third-base line scored Jackson Livengood to lift Gadsden City past Area 7 foe Sparkman 14-13 in a deciding game three to clinch a Class 7A postseason bid.

Gadsden City was down 8-1 through the middle of the second inning of the nightcap after losing the first game of the doubleheader 19-7. The Titans had a 1-0 series advantage heading into Friday after beating Sparkman 1-0 on the road Tuesday.

Errors and walks were killer for the Titans and the Senators took advantage, including a three-run home run by Cole Strachan in the first inning.

The Titans never gave up faith, though, and were loud in the dugout.

“Just because we’ve worked so hard and we know we can compete with anybody,” Gadsden City’s Braxton Parrish, who earned the win in relief, said of why the team remained positive. “Anything can happen.”

Seven runs and taking the lead happened for the Titans in the sixth inning.

Gadsden City players used whatever they could find to make noise in the dugout — old baseball bats, trash cans, you name it — to make a lot of racket. That, along the lack of command by the three Senators’ pitchers used in the sixth, seemed to make a difference.

“I think that was 90 percent of it,” Brewer said of the energy coming out of the dugout. “Without that, it’s a negative vibe. None of that ever happens if we lay down.”

The Titans (10-19) drew five walks in the sixth and twice were hit by a pitch with a ton of background noise. The game-tying run came via a bases-loaded Aaron Nesbitt walk. Parrish’s walk in the ensuing at-bat put the Titans up 13-12 to cap the seven-run inning.

Strachan quickly tied the game at 13 in the seventh inning for the Senators (13-20) on a sacrifice fly to right field. The half inning ended with a throw out at home after a single by BJ Bradham. Gadsden City right fielder Josh Kelley hit cutoff man Paden New, who then threw the ball to Brewer at home to get the out.

Brewer then delivered the game-winning hit to give Gadsden City its first playoff berth since 2014 and third in school history. The senior isn’t shocked it happened, either.

“From the day (Bone) came in here this summer, it was instant — we were confident in him,” Brewer said. “He put (the confidence) in us and we went with it and ran.”

The team ran straight to center field to pile on Brewer at the conclusion of the game and then posed with the scoreboard after shaking hands with Sparkman. The Titans walked and ran through the outfield that was soaked just 12 hours beforehand with the aftermath of hours of rain.

The day was long for the Titans even before the games started shortly after 3 p.m. Bone and several assistants didn’t change until about 10 minutes before the first game started and they all were covered in mud and dirt.

It ended up being well worth it.

“I don’t think I’ve ever been apart of anything like that, to be honest,” Bone said. “With so much on the line and to get down early, the resilience these guys showed – it’s unbelievable, really.”

The Titans will travel to No. 1 Bob Jones for the first round of the playoffs Friday. Gadsden City will first wrap up the regular season Tuesday at home against Oak Mountain.

Titans win at Sparkman!!! 1 win away from playoffs!!!! 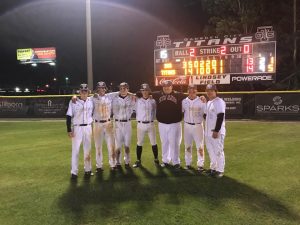 Article and interview courtesy of The Gadsden Times

vs. Gardendale
4:00 pm
View All Events